SDG 5 strives for gender equality and self-determination for all women and girls as well as equal opportunity and empowering self-determination of the sexes. Achieving gender equality is a fundamental element of global sustainable development. Women should be involved in all decisions affecting their lives—just like men are. Equal opportunity means, for example, that both sexes are equally represented in leadership positions on all levels of political, economic, and public life. 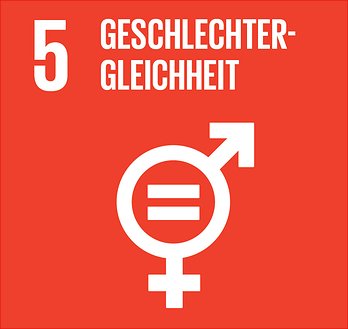 I usually describe myself as an applied microeconomist with labor market policy and family policy as my research areas. I am interested in economic correlations and the modes of action of political measures where work and family meet. This is closely related to institutional framework conditions as well as to social norms and gender roles. Accordingly, you could say quantitative gender research comes into play here as a type of cross-cutting approach.

Gender equality, like all of the other SDGs, is such a fundamental concern that it is impossible for me to say when I first became interested in it. It probably became a focal point of my research because the path to achieving this goal is not always obvious and the obstacles (and possibilities for overcoming these) interest me.

First, we want to see who else at the University beside the sponsorship team is involved in gender research or working on topics relevant to gender equality. I think this will be a relatively large group. We then have to find a suitable networking format to bring together let’s say a legal scholar researching gender-relevant topics with an educational scientist in such a way that they can identify common ground and thus gain new perspectives on their respective research. I hope awareness of the topic will increase when we render these common areas visible.

Nearly all of the SDGs are cross-cutting issues and related to one another. In terms of content, SDG 1 (No Poverty), SDG 3 (Good Health and Well-Being), SDG 4 (Quality Education), SDG 8 (Decent Work and Economic Growth), and SDG 10 (Reduced Inequalities) are probably more closely related to the topic of inequality between the sexes.

My project is entitled “Recent change in gendered language use—diminishing differences, increasing equality?.” Gender-based differences in language and communication are a focal point of my research. Firstly, I establish whether differences exist, if they lead to disadvantages, and if these differences have diminished in the past few years. Secondly, I examine whether gender-based differences are also of interest with regard to changes in language over time, as women generally use innovative linguistic forms sooner and more frequently than men.

From an academic standpoint, gender differences in language—just like different language forms associated with age, ethnicity, or socioeconomic status—are a fixed component of sociolinguistic research. To date, the interaction between these factors has often been disregarded. For example, if a difference exists between men and women in the use of a certain linguistic form, does this difference also exist between young men from the middle class and older women from the working class, for instance?

I also examine these kinds of linguistic differences using larger databases than was previously possible. As a result, we can also identify changes that have occurred over the past few decades. Due to the flexibility of gender roles in Western society, it would be plausible to assume that gender-based linguistic differences have decreased in Western society. We still do not have any proof of this however.

From a personal standpoint as well as an academic and communications perspective, this topic is of interest to me because the public debate on linguistic gender differences is characterized by rather crude stereotypes. In 2017, for instance, a board member of the Uber transportation network commented that if the board included more women, more time would probably be spent talking, implying that fewer decisions would then be made.1 Numerous studies have in fact shown that women do talk more than men in private settings, but less than them in public settings (including work meetings). Statistically, it is therefore to be expected that board meetings at Uber would take less time if more women were on the board!

There are statistically substantiated differences in how men and women talk. However, this statement must be qualified in several regards. Firstly, we also have to take into account other social factors such as age and socioeconomic status. Secondly, linguistic gender differences in Western society are frequency based, meaning that most women use a certain linguistic form more often than most men (or vice versa). This only applies to the majority of men and women, however, not to all of them. Accordingly, we should not limit ourselves or others—or let ourselves be limited by—stereotypes that, if they are correct, are not necessarily bad. A number of popular books and viewpoints are based on the assumption that men and women essentially “speak different languages.” Academic findings contradict this notion, however, and we should not let our decisions be guided by such crude assumptions.

Language is just a part of the social behavior exhibited by people. I very much look forward to sharing thoughts and ideas with colleagues from other departments, obtaining new input, and sharing my own perspective.

My research areas are gender relations in organizations, corporate gender equality policy, diversity management, HR and gender, micropolitics in the workplace, and emotions in organizations. Connection to SDG 5 (Gender Equality): Nearly all of my focus areas deal with equal opportunity and anti-discrimination—with regard to both gender and other aspects.

I was already interested in justice, equality, emancipation, and women’s policy during my university studies. I wrote my doctoral thesis on sexuality and control in organizations.

Networking with researchers who are working on similar topics but from other perspectives will help us to gain new knowledge. I would like to advance the topic of gender equality at Universität Hamburg both in terms of content (research and teaching) as well as structure (University equal opportunity policy).

Gender equality is also a cross-cutting issue addressed by all of the SDGs. In particular, I see links between my focal areas, SDG 8 (Decent Work and Economic Growth), and SDG 10 (Reduced Inequalities).